Does Missing Sleep Cause Weight Gain?

Have you heard that missing sleep can cause weight gain?

Well...have you ever noticed that on the days when you wake up without those full 8 hours, you feel a little bloated?

Or maybe you’re much hungrier than you would be after a full night’s rest?

There are some pretty clear scientific reasons for that, and we’re going to get into them today.

But the brain waves are really just dictated by your neurochemistry.

And all your neurochemistry is doing is sensing all the different things going on in your brain and body.

It’s sensing everything - including hunger, inflammation, stress, you name it – and taking readings.

The region of your brain known as the hypothalamus is acting as the “switchboard operator,” plugging in messages from one part of the body to another and assessing all the signals that are being transmitted.

And one of the main signalers to the hypothalamus is your subcutaneous body fat.

To be clear: “subcutaneous” means “beneath the skin,” so this is the fat we see and the fat we think of when we say we’re “getting fat.”

Even though fat is often considered its own category in the world of organs, it’s actually an endocrine organ.

This means that it plays a huge role in hormonal regulation.

The amount of subcutaneous fat we have is also determined by hormonal regulation, so it’s kind of a chicken-and-egg situation.

This is important to know because humans are a different animal than most.

Humans are the only animal to choose to deprive themselves of sleep.

The only times any animal in the wild will avoid sleep are:

The first is pretty self-explanatory – clearly, you’re not going to lay down for a nap when you might be in danger of getting killed.

As for the second, if an animal’s body senses that it’s starving, it will wake the animal up more regularly so that it can keep searching for food.

And this is where that primal pattern gets interesting for humans.

One of the main signaling hormones secreted from our fat is called leptin.

The job of this hormone is to inform the brain about the status of how much body fat you currently have.

When you’re asleep, it’s scanning the state of the body fat you currently have and sending the message back to the brain: “I have X amount of fat right now.”

The problem is, when you’re sleep-deprived, your brain’s sensitivity to leptin decreases.

This means that you need more leptin to send the same signal to the brain.

It just sends the same amount of leptin to the brain as it did the previous night, when you had plenty of sleep.

You got 8 hours last night, and you’re only going to get 6 hours tonight.

Your brain’s sensitivity to leptin is decreased by 30% after just this one night, missing 2 hours of sleep.

So, why does that matter? 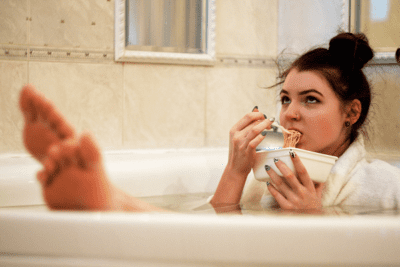 When we eat different macronutrients (carbs, fats, proteins) then our bodies have two main options.

We can either use those calories as fuel right away or store them for later use.

Our body sorts calories into these two categories each time we eat, and the distribution is very different when we’re starving versus when we’re well-fed.

The “stored for later use” category for this partitioning is the stuff that makes up our subcutaneous fat.

The problem is, when the brain’s sensitivity to leptin is down due to lack of sleep, it thinks we need to store more than is actually necessary.

The leptin signals are the same as when you slept enough yesterday, but now the brain is interpreting them as “we need more fat!”

So, you’re more likely to feel hungry upon waking and eat more than you actually need because the brain thinks you just went through a famine.

And yes, this really happens just from one night of missing 2 hours of sleep.

One other area that’s worth mentioning in this article is the change in insulin sensitivity when we don’t sleep enough.

Insulin, as you might recall, is the body’s blood sugar response hormone.

It helps to shuttle sugars from your food into cells for fuel.

When we’re insulin sensitive, that’s a good thing. It means we’re able to efficiently bring sugars into our cells for fuel with minimal insulin molecules doing the work for us.

But when we’re not insulin sensitive (i.e. we’re insulin resistant), that means we need more insulin molecules essentially banging at the doors of each cell just to get a little sugar in for energy.

Being sensitive or resistant is a huge indicator of someone’s overall health and risk for diabetes.

When it comes to sleep deprivation and insulin, the human body is just as dramatic as it is with leptin.

From just one night of missing 2 hours of sleep, our insulin sensitivity decreases by 30%.

Sugar cravings in the morning...all thanks to missing sleep!

This is why, on a morning after you didn’t sleep enough, you probably crave carbs.

The body thinks it’s lacking in sugar when really, the cells are just less sensitive to the insulin trying to bring the sugar to them.

And if the sleep deprivation is chronic – meaning you don’t really ever get enough sleep – you’re highly likely to see a significant difference in how much body fat you carry.

That’s best highlighted in this stat: missing just 1 hour of sleep per night for a year (you’re getting 7 hours a night instead of 8) leads to on average an extra 14 pounds of body fat.

So, if you’re working to cut some fat, sleep should be an integral piece of that plan.

If it’s not…I’d highly recommend you add it.

And if you have trouble getting quality sleep on your own, check out my non-addictive Sleep Remedy supplement.

It helps your body to create the proper neurotransmitters needed to fall – and stay – asleep.