A key piece of health maintenance – and therefore sickness prevention – is getting enough sleep. Learn how getting better sleep can allow your body to prevent and fight off viruses and bacteria

Feeling vulnerable to sickness lately? Let’s check in on your sleeping habits

People who get less than seven hours of sleep nightly are 3x more likely to catch a cold than those who get eight or more hours. Researchers speculate that a lack of sleep may compromise immune function, making people more vulnerable to the common cold. ( Sleep + Sickness Study  Source )

While there are some genetic differences between those who get sick and those who do not, I’ve found that, by and large, sickness is more a result of a lifestyle than genetic predisposition. By skipping those Z’s, you’re putting yourself at a higher risk of catching seasonal illnesses (which are sitting and waiting to pounce around this time of year.)⠀Not to mention, you’re putting yourself at higher risk for a range of chronic illnesses, too. ⠀ 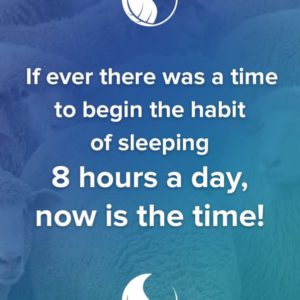 Sleep deprivation triggers changes in the immune system that leave the body more vulnerable to viruses and bacteria.

Poor sleep may lead to:

It’s well understood that sleep deprivation opens the door to a wide range of illnesses by weakening the body’s immune system, now and in the future.

Our immune systems were built to fend off common viruses that cause colds. However, certain factors dictate how well our immune systems are able to do their defense jobs. One of the main contributors to a weak immune system is a lack of sleep. Sleep deprivation can not only weaken the immune system but lead to a cascade of other serious health concerns.

Aric Prather, a psychologist at the University of California, San Francisco, is known for his study on documenting the extent to which a good night’s sleep can be protective to common illnesses, including the Flu.

In this study, 164 healthy women and men with an average age of 30 were asked to use a tracking device similar to the Fitbit and use a sleep diary for a week after being sprayed with a live cold virus in their noses. Each participant was quarantined throughout the study.

How Does Sleep Prevent Sickness?

Getting less than the optimal 7-9 hours of high-quality sleep for adults will put a damper on the immune system’s ability to have the strong innate and adaptive abilities it was built to have.  Keep in mind that children and teens require more sleep.

During sleep, our bodies manage inflammation with the increased production of cytokines. When sick or injured, this inflammatory response has a role in assisting the recovery process and activating innate and adaptive immunity as the body repairs and fights off infection.

Through research and study, it has been found that the body experiences this inflammation response without the onset of an injury or sickness. Realizing the type of cytokines and cells involved in this process indicates that it exists to strengthen adaptive immunity. In other words, the body strengthens immune memory, just as it does sleep helps with learning and skill development.

Why does this happen during sleep?

If our bodies are not getting the adequate amount of sleep to allow processes like this to fully take their course, it can interrupt the delicate balance of immune function leaving the body to remain in an inflamed state when waking. This can lead to other damaging impacts throughout the body and leave it even more vulnerable to sickness and injury.

So while you’re upping your vitamin D intake and stocking up on chicken broth, make sure to put “sleep more” on your flu season checklist. It could be the most important thing you do!

Invest in the rest you deserve.