On Veteran’s Day, last month Kirk and our team had the honor and privilege to attend VETS first fundraising gala at the Hotel Del in Coronado, California. It was the very first of its kind and thanks to Amber and Mark Capone and all the incredible guests and speakers, it was a huge success.

VETS supports scientific research into the benefits and risks of psychedelics for treating TBI, PTSD, addiction, and other conditions affecting veterans.

VETS works to reduce the stigmas associated with mental health and psychedelic therapies and ensures that veterans have access to the most effective healthcare options. Click here to read more about the founding story of VETS and how many lives it has saved and changed forever.

At the event, Kirk and Mikal Vega received an honorary award for being two of the pioneers and advocates in breaking the stigma surrounding the power of psychedelics in treating the most serious, traumatic cases of PTSD and mental health challenges that follow serving in the Military. 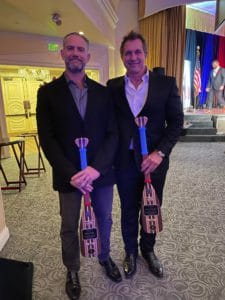 Mikal came to Kirk after being blown up, having some really significant injuries, and being on a lot of medications, 13 to be exact. Mikal was suffering from repetitive TBI, symptoms of PTSD, adrenal fatigue, hormone dysregulation, chronic insomnia, cognitive and emotional struggles, loss of libido, and suicidality.

Mikal was one of the first Navy SEALS to speak of the things he was experiencing after having combat-related symptoms. Many were apprehensive to speak to anyone about these things in fear of the repercussions of potentially being withheld from doing the work they love and trained for. Nobody wants to be perceived as weak or not live up to the hard reputation the Navy SEALS are known for. The big Navy assured Mikal that he should speak up and get assessed, so he took that leap forward disregarding the fear of the unknown that lied ahead and he later felt ostracized for doing so.

Within two weeks of speaking to one of the professionals, he was on his first round of medications and put his trust and faith in the system to heal him. The reality that SEALS are not indestructible and that this line of work can really break a human started a much-needed conversation. Although Mikal was the only one who spoke up, there were numerous other men who were going through the exact same things, but were too afraid to speak up.

A criticial conversation that could ultimately result in life or death.

Mikal’s health declined quickly and there were periods where he didn’t sleep for four days at a time. All of his systems were shot and the pills he was prescribed continued to increase, yet he wasn’t finding any relief.

He knew something was extremely off, but set out to face the unknown in hopes of something better on the other side. As time went on, he wasn’t getting any real answers, yet they continued to increase his medications. He faced what he recalls as the “perfect storm” where every aspect of his life went into crisis mode.

Neurological effects started showing up from IED blasts and soon after he underwent neurosurgery. Through all the endless struggle, he was desperate to find a professional he could actually trust to be in his corner to guide him to healing because what he was currently doing was not working.

There’s a moment when Mikal was on duty as an instructor for the Navy SEALS where he collapsed to the ground after losing strength and experienced some type of cardiac event. His students approached him and exclaimed “ you’re turning gray, Chief! What’s happening?” and Mikal’s response was “I’m dying.” His students proceeded to ask him what they should do and he told them to do nothing. At that moment, was the first time he felt relaxed and at peace and found relief that all the suffering was about to be over.

This near-death experience was the catalyst that urged Mikal to seek alternative routes of healing. He was furious that the people that he put his trust in weren’t looking out for his true well-being as a human.

He revolted against the system and sought out things that made him feel better.  Mikal began working with Eric Potter, who quickly became someone he trusted. It was Eric Potter that told Mikal that he should go talk to Kirk as he was pioneering a new approach to all the health concerns the Navy SEALS were facing, which involved hormonal evaluations and of course, prioritizing sleep.

Dr. Kirk Parsley educated Mikal on what was going on inside his body so that he could begin to understand the complexities of the issues at hand. Mikal learned what was happening in his body physiologically and how shot his adrenals were, which lead to a cascade of other issues with hormones and his thyroid. At this point, he was up to 290 pounds and couldn’t lose any weight.

He found acupuncture, far-infrared spectrum therapy, yoga, and all different types of modalities that western doctors would never prescribe to someone experiencing the issues he was.  Through yoga, he discovered meditation and breathing exercises and began to feel totally new energy that called him to experience more in nature and explore more of his spirituality.

All of the things that began to work for Mikal and heal him from the inside out cost him out of pocket and were not covered through insurance. The battle the VETS is currently fighting now

He went on to work with a master shaman named Don Diego, who worked out of Peru, and through this, Mikal had some revelatory experiences with Ayahuasca. From this experience, he discovered Kundalini yoga and studied with a master, which changed every aspect of his existence for the better.

Before this experience, Mikal had been speaking with Kirk on a daily basis, after he went away and came back, Kirk didn’t recognize him. In fact, Kirk and Mikal ran into each other at a coffee shop near the Naval Base in Coronado and it took Kirk a few minutes to realize who he was interacting with. Kirk said, “ he was a changed man.”

“Kirk was one of the core foundational few that helped me along my journey to healing and ultimately self-discovery. Sleep was an absolutely critical part of his journey, as when he was able to get even a couple of hours of quality sleep, it took the edge off. “

Mikal found his health through lifestyle and not medications, which included prioritizing and becoming more disciplined about his sleep and other modalities that made him feel alive and well.

“Through this work, I've been able to gain an objective understanding of what was formerly a subjective nature of existence. Meaning, we have these, subjective types of experiences of what and how life is and it's all predicated upon a mixture of what comes in from the outside, what's been taught to us, what's been programmed into us through schools, parents, and all of our life experiences. And then somewhere in there is our own personal experience after we've had the experience through all the filters of everything that's been put into our psyche.

And when you find a master that has techniques, and they deliver those techniques to you to it accelerates everything exponentially.  So, for me, the plant medicine was kind of the breaching of the door.

And made my own power utilizing these techniques that continue to reward through these meditations in this lineage I teach at the RA MA Institute.

The outward is going to manifest in a way, if you allow it, if we allow it, it will manifest in a way that ultimately mirrors the beauty of that journey that we're experiencing. On a day-to-day breath-to-breath, moment basis. And it's one that's going to be infinitely rewarding, not only for the person experiencing it but for everybody else that gets to witness it. Because what that does is it begins in effect, that energetic effect of awakening within others.